Is Western medicine evidence based?

The British Medical Journal has been reviewing the evidence base of 3000 therapies carried out on the NHS. Here is a simple graph of their findings. 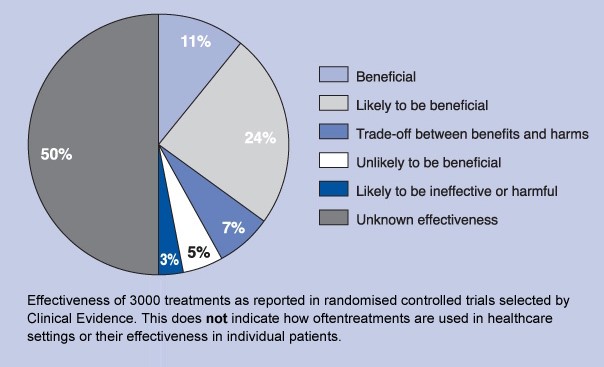 It is quite startling to say the least. The more you look at it the more paradigm shattering it is. Western medicine loves to hold the narrative high ground that it is evidence based. It is the best medicine in the land. And don’t get me wrong, it certainly has its place and is good for a range of issues. But this graph is bonkers. 50% unknown effectiveness. Only 11% shown, by research, to be effective.

To be fair there are a lot of different therapies used and some medications which are mainly researched for one area are prescribed for others. Anyway, what is quite frustrating here is that, because of the narrative that western medicine is scientifically based, it then becomes entrenched, even infallible, and other therapies have to have a wealth of quality evidence to even begin to get a look into the medical model and national health services. Obviously, with my background I am talking about acupuncture and Chinese medicine, which has to overcome huge hurdles to even be considered by the medical establishment. Yet approaches are being used that have unknown effect. There are 90 treatments that are likely to be ineffective or harmful being used. And acupuncture, that has proven to be safe, has proven to be effective for many conditions and for many others is at least likely to be effective (according to a research model that acupuncture is shoehorned into), is barely used on the NHS at all. Even though it is shown to be cost effective for the conditions that have been analyzed! Why is it not more available to those who need it?! Especially as the NHS is in crisis. I hope things will change.